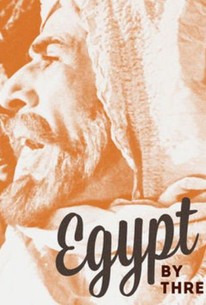 The three stories in this anthology are all set beside the Nile River and are narrated by Joseph Cotten. The first story deals with the potentially dangerous, tumultuous love affair between a knife-thrower and his partner. The knife thrower is married and when his wife finds out about the affair, she gives him an ultimatum that could result in the end of the girl. In the second story, a caravan to Mecca finds itself afflicted with cholera. Now the leader must decide what to do. In the last story, two Yankee con artists attempt to sell holy bread. One of them really wants to use the sacred loaves to smuggle diamonds out of the country. ~ Sandra Brennan, Rovi

Ann Stanville
as The Girl

Jackie Craven
as The Wife

Joseph Cotten
as Narrator
View All

Critic Reviews for Egypt by Three

There are no critic reviews yet for Egypt by Three. Keep checking Rotten Tomatoes for updates!

There are no featured reviews for Egypt by Three at this time.