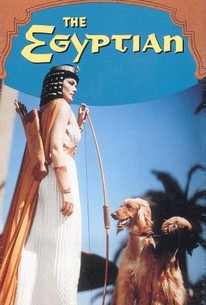 Based on the novel by Mika Waltari and helmed by Casablanca director Michael Curtiz, The Egyptian, a lavish period soaper, is set several centuries before the birth of Jesus Christ. Young Egyptian healer Sinuhe Edmund Purdom (ere accompanied by his servant, Kaptah, played by Peter Ustinov) draws the affection of barmaid Merit (Jean Simmons) who seeks his hand in marriage. Sinuhe provides medical assistance to the epileptic Pharoah, Akhnaton (Michael Wilding), who, meanwhile, becomes convinced that only one god exists, and thus infuriates all of his polytheistic priests, who secretly plot to assassinate him. Sinuhe has an affair with a Babylonian whore, Nefer (Bella Darvi), but grows listless with her and eventually ends the relationship, harkening back to Merit. However, she is soon extinguished, with an arrow through the heart, for also being monotheistic. Angered by this, and believing Akhnaton's ideas directly responsible for Merit's death, Sinuhe and his muscular friend, the affable Horemheb (screen heartthrob Victor Mature) poison the Pharoah. Akhnaton then dies while Horemheb prepares to ascend to the throne. Ingmar Bergman had a point when he admonished the idea of falling for one's lead actress, and it is a lesson one wishes producer Daryl Zanuck had learned; he purportedly had an extramarital affair with Darvi, taking her as a "plaything," but grew sick of her after casting her in seven films. Her career then torpedoed. (Little wonder - her horrendous performance in this film must be seen to be believed; Variety called it "less than believable or skilled.") This $4.2 million film (a massive amount for 1954) suffered from additional production problems as well, with Marlon Brando originally slated to star, but replaced, at the very last minute, by Purdom, a contract player for 20th Century-Fox.

Donna Martell
as Lady in Waiting

Edmund Cobb
as Patient in Dispensary

Joan Whitfield
as Governess
View All

Critic Reviews for The Egyptian

Lavishly produced by Zanuck, this big-budget historical epic is preposterously plotted and acted, though Shamroy's color cinematography is good.

Audience Reviews for The Egyptian

A very big Cinemascope picture from the days when big desert pictures were all the rage, all about how an altruistic young doctor (Ed Purdom) is beguiled by a slinky Babylonian harlot, thereby losing 'good' hometown babe but finally getting her again by the final credits (over 2 hours later!). There's a couple of subplots too, for diversion. One is about some wacky new religion that has only one god (cue angelic chorus, also big in the 50s). Another is about how the doctor's best buddy (Vic Mature, actually quite good in this) wants to be Pharoah. Woah. The problem is that Purdom defies every attempt to empathize with him, or the story. Leave it.

Creaky biblical balderdash with Jean Simmons as always giving a good performance and Peter Ustinov a fun one, everybody else is stiff. Curtiz, usually able to keep something like this going, provides a leaden pace.