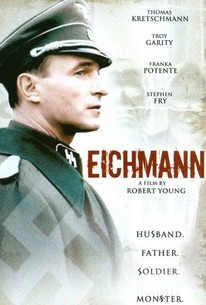 The man responsible for the destruction of more than six million lives accounts for his role as the architect of Adolf Hitler's final solution in this historical drama starring Stephen Fry, Franka Potente, and Thomas Kretschmann. Based on the final confession made by Adolf Eichmann just before his execution in Israel, director Robert Young's film begins 15 years after the World War II has ended. Eichmann has been captured by Israeli intelligence. As a senior officer in the SS, Eichmann played a pivotal role in making the Holocaust a nightmarish reality. Now, as Eichmann prepares to die in front of the entire world, he accounts for his participation in one of the greatest atrocities ever committed.

Mr. Kretschmann holds your attention through each whining complaint and bland denial. His character may be banal, but his portrayal is the only thing that keeps you watching.

Eichmann could be just another bland program you flip through on the way to the History Channel as you crack open your third beer.

Sincere, handsomely produced rendition of real-life encounter...amounts to an engaging drama seasoned by a dollop of soft-core titillation. History buffs, especially, among the upscale art-house crowd won't be disappointed.

Feels the burden of history so heavily that it's effectively smothered by it.

A subject that will never be forgotten: the Holocaust. Eichmann, its chief organiser, is the closest we can get to Hitler himself in this, and the sordid details of his army days have enormous relevance

Adolf Eichmann was one of the greatest criminals that history has ever known. He was responsible for the death of six million Jews. This film is a good film, but one that falls short of its potential due to its subject matter. I felt that although quite good, it lacked something to really make this film stand out. This is a well acted film that works well due to its subject, and if you're interested in the story, then this may be a film to watch. Eichmann concerns the trial and execution of Adolf Eichmann for crimes against humanity. The plot is well structured, but like I said, it should have been done a bit better because this trial was one of the biggest, most important trials in the history of the 20th century. Actor Thomas Kretschmann plays the titular role, and he is the saving grace of the film, and he makes you keep watching because his performance is intense and disturbing. The film is quite interesting but for its short runtime, I feel that the filmmakers rushed it a bit, and didn't offer a more elaborate in depth look at the Eichmann trial. For what we see here, it is good, but it does fall short of what this film could have been. The performances from the cast are what really save this film from being a total dud and the story is quite interesting of course, but if you want to know the full facts, read books on the subject and watch a few documentaries as well. This film offers an interest in that part of history, and it's something worth a watch due to the fact that these events were quite important and played a big part of bringing justice to one of the biggest crimes ever committed. For all its faults, it's thrilling to see the interrogation of Adolf Eichmann unfolding and more facts about his involvement arise and Eichmann gets exactly what he deserved. Overall imperfect, but with great performances, this one is worth seeing.