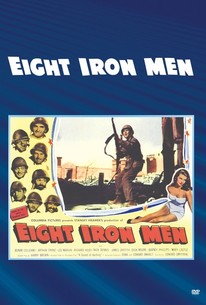 In this war drama, while one of their mates is trapped outside under a hail of machine gun fire, the remainder of an infantry squad find themselves trapped inside a bomb-gutted house. The men make several attempts to save him, but they consistently fail. Finally, the one squad member, who seemed more preoccupied with fantasizing about women, runs out and saves the beleaguered soldier.

David McMahon
as Cafferty
View All

This film, from A Sound of Hunting, which was a play by Harry Brown, done in 1945 on Broadway, is a dismally meretricious thing, half of it smoldering dugout drama and the other half cheesecake burlesque.

A film liked by the critics but never able to find an audience.

There are no featured reviews for Eight Iron Men at this time.