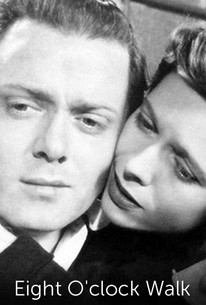 The iniquities of circumstantial evidence are explored in the compact crime drama Eight O'Clock Walk. Because he was the last person to see her alive, and because his playful behavior could be misconstrued as harassment, London taxi driver Tom Manning (Richard Attenborough) is arrested for the murder of a little girl. Manning's American wife Jill (Cathy O'Donnell) has a great deal of difficulty finding a lawyer who will defend her husband in court. She finally settles upon Peter Tanner (Derek Farr), who at first is not entirely convinced that his client is innocent. Eventually he is convinced, and even manages to expose the real murderer, one of the witnesses for the prosecution. Based on a true story, Eight O'Clock Walk is one of the most oft-telecast of 1950s British films, and deservedly so. ~ Hal Erickson, Rovi

Bartlett Mullins
as Hargreaves
View All

There are no critic reviews yet for Eight O'Clock Walk. Keep checking Rotten Tomatoes for updates!

There are no featured reviews for Eight O'Clock Walk at this time.