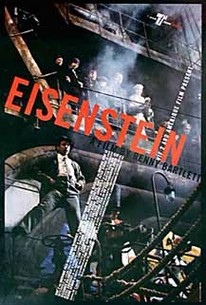 If you're content with a clever pseudo-bio that manages to have a good time as it doles out pieces of the famous director's life, Eisenstein delivers.

Fudges fact and fancy with such confidence that we feel as if we're seeing something purer than the real thing.

Best enjoyed as a work of fiction inspired by real-life events. Those seeking a definitive account of Eisenstein's life would do better elsewhere.

Fueled by Mr. McBurney's incandescent performance, it is a portrait of the artist as political and spiritual renegade.

Bartlett's hero remains a reactive cipher, when opening the man's head and heart is the only imaginable reason for the film to be made.

Eisenstein lacks considerable brio for a film about one of cinema's directorial giants.

It's often infuriatingly glib and posturing, and yet it has been made with great evident care and manages to deliver up the man in a way to arouse further curiosity in even the most unknowing viewer.

It may not be entirely reliable in historical terms, but it offers an intriguing impression of the man, his art and his times.

Elliptical, unsatisfactory and yet oddly compelling.

There are no featured reviews for Eisenstein at this time.