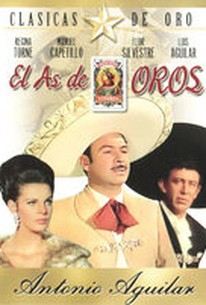 From director Chano Urueta, this 1968 Mexican musical-comedy stars Manual Captillo as an overly confident man who makes the mistake of flirting with a tourist with the aim of riling up his sweetheart. Before long, his girlfriend is giving him a taste of his own medicine by taking up with a male tourist. El As de Oros also stars Flor Silvestre and Regina Torne. ~ Matthew Tobey, Rovi

Manuel Capetillo
as "The Golden Age"

There are no critic reviews yet for El As De Oros. Keep checking Rotten Tomatoes for updates!

There are no featured reviews for El As De Oros at this time.