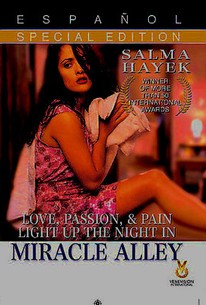 This Mexican drama is a faithful adaptation of Nobel-laureate Naguib Mahfouz's novel, only it is set in contemporary Mexico City instead of 1940s Cairo. The film is comprised of three overlapping "chapters" that come together in the fourth chapter. Each segment, centering on a different character, takes place at the same time in a rundown neighborhood. The disparate characters all have one thing in common--none of them get what they want. Chava, the son of tavern-owner Rutilio, wants to go to the US. The fiercely independent and beautiful Alma is thinking about marrying a wealthy shop keeper. The impoverished young barber Abel is in love with Alma. Then there is the spinster Susanita who owns an apartment house and spends her spare time involved in unhealthy love affairs. After killing his father's mistress in a fit of moral outrage, Chava ends up on the lam for two years. Abel takes off for a long time and Alma ends up becoming a drug-addicted prostitute whom Abel cannot save. Susanita gets married to young Guicho and learns that he is robbing her. She is just about to toss him out when she discovers that her really loves her after all. ~ Sandra Brennan, Rovi

There are no critic reviews yet for El Callejón De Los Milagros. Keep checking Rotten Tomatoes for updates!

There are no featured reviews for El Callejón De Los Milagros at this time.