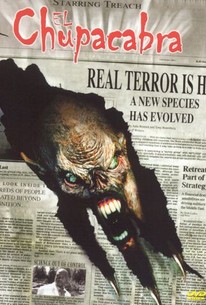 Rapper-turned-actor Anthony "Treach" Criss heads up the cast of this low-budget horror film from the filmmaking team of Paul Wynne and Brennon Jones. Literally translating to "goat-sucker," the legendary Chupacabra is rumored to be a blood-sucking beast that menacingly preys on animals and humans alike. When the creature is let loose and begins leaving a trail of dead in its path, it's up to a scientist and an animal control officer to put a stop to the carnage. Eric Alegria and Elina Madison also star.

There are no critic reviews yet for El Chupacabra. Keep checking Rotten Tomatoes for updates!

There are no featured audience reviews yet. Click the link below to see what others say about El Chupacabra!