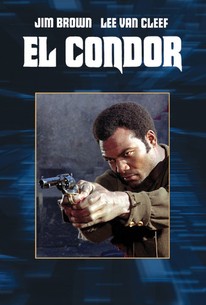 Jim Brown and Lee Van Cleef team up for this western set on the Mexican border. Brown is Luke, who escapes from a chain gang after learning that a fortune in gold is hidden in the Mexican fortress of El Condor. He joins up with the snake-eyed crook Jaroo (Lee Van Cleef) and together they round up a tribe of Apaches, headed by Santana (Iron Eyes Cody), to attack the fort -- convincing the Indian renegades that the fort houses food and guns greatly needed by the Apaches. During their first crack at taking the fort, Luke and Jaroo are captured by the fort's commandant, Chavez (Patrick O'Neal). Claudine (Marianna Hall), the wife of the commandant, falls in love with Luke and she aids them in their escape from the fort. Later on, she is instrumental in getting Luke and Jaroo's band into the fort -- diverting the gaze of the fort's defenders by disrobing in front of a well-lit bedroom window. Chavez escapes, but Santana is shot by Jaroo after discovering that Jaroo deceived him. With Santana shot, the Apaches leave the fort, carrying the food and ammunition. Now the only ones left to defend the defenseless fort are Luke, Claudine, and Jaroo.

George Ross
as Guard for Convicts

Per Barclay
as Convict
View All

Lee Van Cleef's last words in El Condor are: "What am I doing here?" Amen, brother.

There are no featured audience reviews yet. Click the link below to see what others say about El Condor!