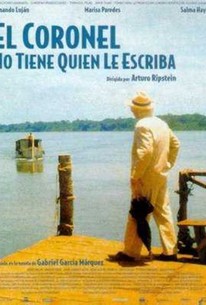 An elderly couple must come to terms with a troubled past and an uncertain future in Arturo Ripstein's El Coronel No Tiene Quien Le Escriba/No One Writes To The Colonel, based on a novel by Gabriel Garcia Marquez. The Colonel (Fernando Lujan) retired from the military some time ago, and lives out his days with his wife Lola (Marisa Paredes), a severe asthmatic. The couple have been emotionally devastated by the recent death of their only son, and it looks as if the couple may soon be evicted from their home, due to their inability to pay the rent. The Colonel naively holds on to his faith that his pension check will soon arrive in the mail -- even though he's been waiting for 27 years so far -- and that the fighting cock left him by his son will prove to be a winner. Lola, however, holds no such illusions and finds respite only in her occasional trips to the local movie house. Meanwhile, The Colonel finds himself making friends with Lola (Salma Hayek), a woman who was involved with his late son when not plying her trade as a prostitute. Marking the comeback of veteran actor Fernando Lujan, El Coronel No Tiene Quien Le Escriba/No One Writes To The Colonel was screened in competition at the 1999 Cannes Film Festival.

Eugenio Lobo
as Alvaro
View All

There are no critic reviews yet for El Coronel No Tiene Quien le Escriba. Keep checking Rotten Tomatoes for updates!

There are no featured reviews for El Coronel No Tiene Quien le Escriba at this time.