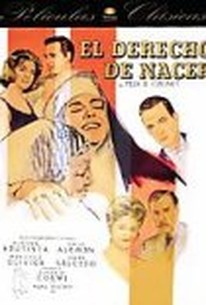 El Derecho de Nacer was released in English-speaking markets as The Right to be Born. Unmarried and pregnant, a young woman (Barbara Gil) seeks out an abortion. She approaches a doctor (Jorge Mistral), who refuses to perform the operation. Flashing back to an incident in his own past, the doctor explains his "right to life" stance. Adapted from a once-controversial novel by Felix B. Caginet, El Derecho de Nacer states its case with calm forthrightness, never descending to pure tract or dogma. During its initial run in Mexico, the film set a box-office record, a fact as much attributable to the notoriety of the Caginet novel as to the quality of the film itself. ~ Hal Erickson, Rovi

There are no critic reviews yet for El Derecho de Nacer. Keep checking Rotten Tomatoes for updates!

There are no featured reviews for El Derecho de Nacer at this time.