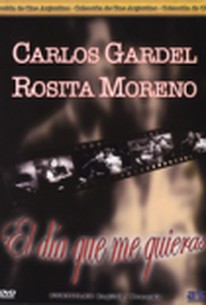 El Dia Que Me Quieras was one of two Spanish musicals built around the talents of tango star Carlos Gardel. Here, as in the subsequent Tango en Broadway, the emphasis is not on plot (a syrupy, sentimental affair) or characterization, but dancing, and plenty of it. Given that the tango was still illegal in certain portions of Latin America in 1935, the film was considered rather daring in its time. Co-starring in Dia Que Me Quieras is popular Spanish leading lady Rosita Moreno, best known in the U.S. for her supporting performances in such films as A Medal for Benny (1945). As a filmed record of Carlos Gardel in action, Dia Que Me Quieras is all the more valuable in that Gardel died the same year the picture was released. ~ Hal Erickson, Rovi

There are no critic reviews yet for El Dia Que Me Quieras. Keep checking Rotten Tomatoes for updates!

There are no featured reviews for El Dia Que Me Quieras at this time.