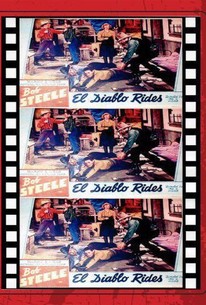 In his sixth and final Western release of 1939, diminutive Bob Steele played a cowboy, who, searching for his father's killer, is mistaken for a notorious outlaw in a corrupt border town. Directed by producer Harry S. Webb's younger brother Ira, El Diablo Rides featured the usual Metropolitan Pictures stock company of villains, including Carleton Young, Ted Adams, and Robert Walker. The barely released Western, however, was a far cry from Bob Steele's main effort of 1939, the role of Curly in Lewis Milestone's perhaps definitive version of Steinbeck's Of Mice and Men. ~ Hans J. Wollstein, Rovi

There are no critic reviews yet for El Diablo Rides. Keep checking Rotten Tomatoes for updates!

There are no featured reviews for El Diablo Rides at this time.