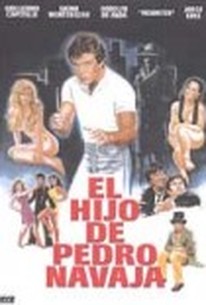 Based on the song Mack the Knife, the very popular Rubén Blades song Pedro Navajas was the inspiration for a very popular Mexican movie taking the song name as its title, about a pimp and prostitute whose love/hate relationship resulted in their mutual destruction. In this sequel, their son develops into a defender of women. Raised in the U.S., the lad comes to Mexico when he hears his mother has died and attempts to look for his father. He is shocked to discover that he, too, has died. He is motivated to learn how to use a switchblade with uncanny skill, and earns for himself the sobriquet "Navajas," or "Blades." ~ Clarke Fountain, Rovi

There are no critic reviews yet for El Hijo de Pedro Navaja. Keep checking Rotten Tomatoes for updates!

There are no featured reviews for El Hijo de Pedro Navaja at this time.