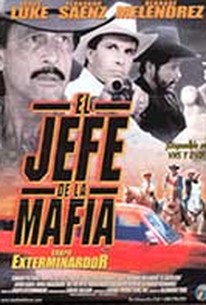 An honest police officer looking to apprehend a dangerous member of a local drug cartel accomplishes his righteous goal, only to find that the reach of the criminal kingpin who has marked the man for death extends further than he thought in this Spanish-language thriller starring Jorge Luke. Pedro is a dedicated cop who always goes by the book. Barnabe is a low-level criminal working for a high profile drug cartel. When Barnabe is marked for death by his ruthless boss, Pedro inadvertently saves Barnabe's life by throwing the man with a hearty price on his head behind bars. Little does Pedro realize that in protecting Barnabe he has signed his own death warrant, and now between the corrupt police officers and murderous mob men it's going to take a miracle for these two men to emerge from the ensuing hail of gunfire alive. ~ Jason Buchanan, Rovi

There are no critic reviews yet for El Jefe De La Mafia. Keep checking Rotten Tomatoes for updates!

There are no featured reviews for El Jefe De La Mafia at this time.