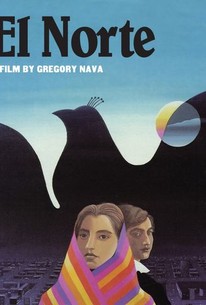 "When will we find a home?" Rosa asks her brother Enrique at the end of their long journey. Alone in a strange land, they have only each other. The search for roots and the importance of family inform Gregory Nava's and Anna Thomas's lyrical and emotionally powerful El Norte, just as they will the filmmakers' later My Family, which showed at Sundance in 1995. One of the first films to portray faithfully the plight of Central American political refugees, El Norte is a remarkable fusion of documentary realism and visual poetry. When their father is killed and their mother arrested by the military, Rosa and Enrique flee the coffee fields of Guatemala for el norte, a place they know only from pictures in their godmother Josefita's Better Homes and Gardens magazines. Their trip is often harrowing, taking them through the teeming squalor of Tijuana to the anonymous streets of Los Angeles, but there is time for joy and laughter, too. They learn English in a lively night school, and when Rosa is intimidated by the laundry room in the house she is cleaning at her new job, she washes the clothes by hand and spreads them on the lawn to dry as she used to do at home. Thomas's eloquently crafted characters are brought to vibrant life by Zaide Gutierrez's and David Villalpando's remarkable performances, and the authentic music and James Glennon's moody cinematography create an indelible sense of place. Roger Ebert calls El Norte a modern Grapes of Wrath, but it is also a very warm and personal story about the resilience of the human spirit and a celebration of hope that survives in the face of despair.

Jorge Moreno
as Man in Bus

It ought to be required viewing -- on both sides of the border.

[Audiences will] get plenty for their money: powerful acting, flint-clean cinematography, a riveting story that transcends geographical boundaries, and a touch of the supernatural thrown in for good measure.

There is no question El Norte is one-sided, even propagandistic and sentimental at times, but its emotional and visual power supersedes some of its predictability.

Through the efforts of cinematographer James Glennon, Nava has almost succeeded in matching the unique style of Latin American writers like Gabriel Garcia Marquez whose tales are a vibrant mixture of fantasy and reality.

El Norte is an epic story told on a small, intimate human scale.

El Norte gives us a vision of the downside of the American dream. The film's concentration on the plight of its young hopefuls, however, is done with much humour and compassion, so that the tragedy of its message is very bracing.

Its images are so forceful, and so beautiful, that they transcend the story's simplicity and reach into a realm that can be justly called poetic.

It never drags and has moments of Costa Gavras-like suspense which Nava presents in a style all his own.

Working without major studio support, Nava and Thomas prove themselves filmmakers of exceptional skill, taste and idealism, who have made El Norte both an impressively finished and deeply moving vision of three very different Americas.

It has its moments of gritty realism, but also many of humor, and the technical production is spectacularly good with stunning color photography by James Glennon.

Expressionist, too, is the use of music in what is in many ways a film of operatic emotional dimensions.

I'm sort of embarrassed that I like this so much, especially the part when it devolves into a horror story because of THE MICE OH MY GOD THE MICE, but I don't know - it's also kind of charming in its own simple way.

Brother and sister from Guatemala decide to seek refuge in the U.S. That's the first part. The second half details their life in that magical city in "the north" called Los Angeles. The last shot is heartbreaking. Well plotted film deservedly won an Oscar nomination for Best Original Screenplay.