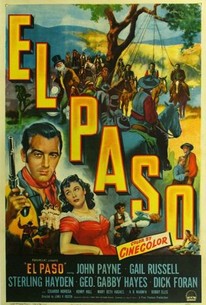 Produced in garish Cinecolor, this aspiring "A" Western features John Payne as Clay Fletcher, an Eastern lawyer assigned to track down a judge whose signature is needed for some estate papers. Clay traces the judge, Henry Jeffers (Henry Hull), to El Paso, a lawless town ruthlessly run by saloon owner Bert Donner (Sterling Hayden) and a corrupt sheriff, La Farge (Dick Foran). The judge has become a hopeless drunk and is used as a pawn by Donner, who terrorizes the local farmers off their land. When one settler, John Elkins (Arthur Space), shoots and kills a deputy in self-defense, Clay is at first inclined to trust that justice will prevail and arranges for traveling salesman "Pesky" (George "Gabby" Hayes) to keep Judge Jeffers sober long enough to render a just verdict. But a threatened Donner has both Jeffers and Elkins brutally killed and against the wishes of the judge's daughter Susan (Gail Russell), Clay takes matters into his won hands by organizing a vigilante group. Grandfather Fletcher (H.B. Warner) arrives to remind Clay of his judicial pledges but he, too, is killed by the increasingly insane La Farge. In the end, only the prospect of a mass lynching brings Clay around and the guilty all face a jury of their peers.

Clay's descent into dubious enforcement of the law starts fun, with a lively montage of him learning to draw and shoot his pistols with speed. But it soon devolves into one miniature Ox-Bow Incident after another.

There are no featured reviews for El Paso at this time.