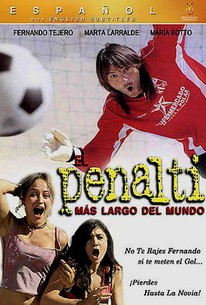 Spanish helmer Roberto Santiago burst onto the cinematic scene in 2000 with the acclaimed short piece Roulette. He follows it up five years later with the highly-anticipated debut feature The Longest Penalty in the World. This raucous comedy unfolds in a local soccer square-off between two Spanish teams. A goalkeeper is injured, another defense man is brought in as a substitute, and a last-minute crowd interference due to the player substitution causes a week-long delay in the wrap-up of the match. The gawky and geeky alternate player, Fernando (Fernando Tejero), finds himself riding the crest of popularity in his town over the course of that week, which includes dating Cecilia (Marta Larralde), the paramour of the injured defense man, and becomes the unlikeliest hero in the town while the game is suspended, with royal treatment from the rest of the locals. María Botto and Carlos Kaniowsky co-star. ~ Nathan Southern, Rovi

There are no critic reviews yet for El Penalti Mas Largo Del Mundo. Keep checking Rotten Tomatoes for updates!

There are no featured reviews for El Penalti Mas Largo Del Mundo at this time.