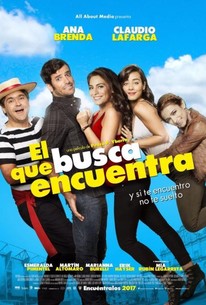 The Busca Find tells the story of Marcos (Claudio Lafarga) and Esperanza (Ana Brenda Contreras), two children who fall in love when they lose at Estadio Azteca during a football game. More than 20 years later in which they have not been seen again, life has taken them by different paths, but the memory of that infantile love is so strong that they are able to find again and to have a magic appointment. However, through a terrible confusion they separate again, so they will have to find a way to get back together.

Alan Silverman
as Agent
View All

An entertaining and unpretentious film, loaded with nostalgia with a hopeful outcome and that has in soccer the catalyzing elements of the romantic story that narrates. [Full review in Spanish]

There are no featured reviews for El que busca, encuentra at this time.