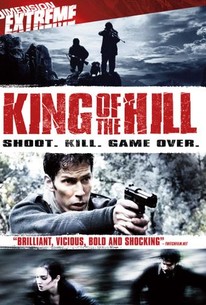 A man traveling through rural Spain in search of the town where his girlfriend awaits becomes ensnared in a surreal waking nightmare in director Gonzalo Lopez-Gallego's intricate thriller. Quim (Leonardo Sbaraglia) was on his way to visit his girlfriend when he stopped off at an isolated gas station for some fuel and a quick trip to the restroom. But the men's toilet is out of order, and in his haste Quim ducks into the ladies room. Upon exiting ,Quim crosses paths with a mysterious beauty named Bea (Maria Valverde). The sexual tension is as immediate as it is undeniable, and the two strangers engage in some explosive, anonymous sex right there on the bathroom sink. Recognizing the opportunity in the moment, Bea absconds with Quim's wallet and lucky lighter. Of course, it isn't long before Quim realizes what's happened, and when he subsequently spies Bea's car sitting abandoned on an unmarked road, it seems like the perfect opportunity to retrieve his personal property. Suddenly, out of the quiet country air, a shot rings out and Quim is wounded. As Quim ducks for cover nearby, he sees that Bea is also hiding from the unseen sniper. Eventually the frightened pair manages to escape their assassin's bullets and make their way to the local police. Much to their surprise, the authorities not only voice doubt about the existence of the mysterious sniper, but also cast a troublingly suspicious eye on them. Regardless of their initial skepticism, however, the police are about to discover that anyone who dares venture out on this mountainside is immediately marked for death.

allows a compelling moral message to emerge from its amoral woodland playgrounds.

It's at its best in a tense middle section that plays as a pared-down existential nightmare.

The tautness of the first hour is tremendous, and features something I never thought to see in such a movie: the spectacle of a man, hiding inside a car from his would-be killer, and doing something we would all probably do in real life: actually whimper.

As a work of hard-driving tension, this is satisfyingly terse, methodical and relentless.

Is more disturbing and more intelligent than Friday the 13th.

A political thriller in the sense that it's bound to polarize audiences...

The revelation of the shooter's identity, however, is a bit of a yawn, especially if you have seen the 2006 French film Them or last year's British horror movie Eden Lake.

It starts off well enough as Deliverance and Duel but becomes very conventional when, two-thirds of the way through, the snipers are revealed and it turns into what might be called Haneke-panky.

Stylishly shot, this tense Spanish thriller sees the couple lost in a mountain wilderness while being hunted by an unseen sniper.

Engaging, well made horror that gets a decent amount of tension out of its simple premise, even if it's not quite as shocking and provocative as it thinks it is.

In this solidly crafted, well performed thriller, humanity gets lost in the deep, dark woods.

A traveller who gets lost in the isolated Spanish countryside finds himself stalked by unknown armed assailants intent on murder. This extremely taut and economical Spanish indie thriller has a no-nonsense approach that I actually found quite refreshing. No soapy sub plots or irrelevant embellishment, just a tense cat and mouse game between hunters and prey. Obviously owing a debt to the likes of Duel and Deliverance, the story is a simple tale of survival in the face of adversity and some very effective direction and solid performances make for an intriguing and suspenseful experience. Unfortunately the one gaping flaw is the revelation of who the hunters are and why, which is a shame because I felt it wasn't really necessary. If the motive behind the killings were left unknown, as in The Hitcher or Duel, it would've been far more effective as the explanation is rather weak and glib. It's a real shame because the execution is very strong, but if you can live with the half baked plot twist it's actually very well done.

"The King of the Hill" is kind of a simplistic hunter/prey film, a spanish "Deliverance" of sorts. Two travelers get lost on a remote mountain-side road as a group of men hunt them down. It's not a particularly fresh concept, and certain aspects of the film reminded a little too much of the Dnepropetrovsk maniacs, a pair of Ukrainian thrill killers from just a few years ago (two young men who snapped photos of their victims on their cell phones). I guess it's not really a spoiler to tell you that the killers are men, or that they're young, which is of less consequence than the filmmakers seem to want you to believe. As far as these types of films go, "El rey de la montana" is done adequately, although I can't give much reason to recommend it other than need to pass some time. It is indeed a passable film.

Tense, atmospheric thriller from Spain about two strangers travelling through remote mountainous countryside who are stalked by a pack of sniper-rifle wielding hunters. We're seeing a lot of these backwoods hillbilly killer thrillers nowadays with every country seemingly adding to the genre. This Spanish effort may not be the best or goriest of them but it's well made and acted and reveals a shocking little suprise once the identity and motive of the hunters is revealed. Overall though there's nothing ground breaking going on here but it's a pretty decent effort.

It began a tiny bit boring and iritating but I decided to go on watching and I was glad not to have switched off. This Movie is a proof how teenages these days are badly influenced by Video Games. I thought they would reveal the background of the young girl, but she got killed and at this point it didnt make any sense to me. I didnt like the ending. All around the Movie was not bad.