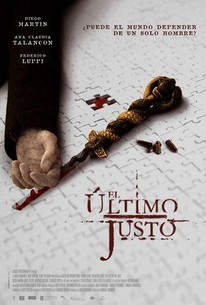 An inexplicable attempt on his life is followed by an equally perplexing rescue, leading an unremarkable thirty-five year old into a dark underworld where two warring factions are preparing for the Final Judgment. Teo Arroyo's life never really amounted to much, until the day he was nearly murdered by a complete stranger. Thankfully, someone was looking out for Teo on that fateful day. Ushered to safety and informed that two mysterious armies have been engaged in a secret struggle based on their beliefs concerning "the Just," a group of men whose survival must be ensured in order to ensure that Final Judgment comes to pass, Teo soon learns that he is in fact the last of the just. But both factions believe that they are fighting for good: The warriors who want him to live believe that they can save humanity by protecting him at all costs, and the assassins gunning for his life believe that only his death can bring about mankind's long-overdue regeneration. Now, as Teo attempts to stay once step ahead of both armies, he quickly learns that his life is far more significant than he ever could have imagined. ~ Jason Buchanan, Rovi

One could wonder about the circumstances that allow [the film] to exist. [Full review in Spanish]

There are no featured reviews for El Ultimo Justo at this time.