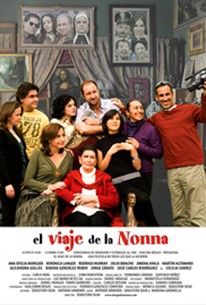 Mexican helmer Sebastian Silva's Spanish-language comedy Nonna's Trip marks one of the few recent dramas to tackle, head-on, the complications wrought by the mnemonic loss attached to senility. Ana Ofelia Murguia stars as Nonna, the grandmother of the title, whose hold on the past is rapidly slipping away from her. During her last days of cognizance, she reaches out for one last, desperate hold on the golden memories that she cherishes: a trip to Italy, and a visit to her late husband's place-of-birth on that peninsula. Together with the members of her immediate family, the Todaros, Nonna indeed embarks on such a voyage, in search of relics from the past - a journey replete with joyous, occasionally surprising discoveries and radiant with the bonds of togetherness, as the elderly woman's self-awareness lingers tentatively. ~ Nathan Southern, Rovi

There are no critic reviews yet for El Viaje de la Nonna (Nonna's Trip). Keep checking Rotten Tomatoes for updates!

Charming film with a wonderful performance by it's leading actress, with help from a funny supporting cast that'll help you get over plot holes, but there was still much more to do with the setup.