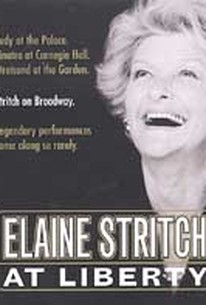 While she never became a household name for her film and television work, Elaine Stritch is one of the true living legends of the New York stage, with a career that's spanned a remarkable seven decades and seen her work side by side with some of the greatest names in the American theater. In 2002, Stritch collaborated with playwright John Lahr to create +Elaine Stritch at Liberty, a Tony award-winning one-woman show in which Stritch shared the ups and downs of her private and professional life with her audience as she sang some of her favorite songs (including tunes by her friends and collaborators Noël Coward and Stephen Sondheim), talked about her partners on-stage (Ethel Merman) and off-stage (Marlon Brando, Ben Gazzara), and recounted her long battle with alcoholism. Andy Picheta directed this film adaptation of +Elaine Stritch at Liberty (in collaboration with Nick Doob, Chris Hegedus, and D.A. Pennebaker), in which highlights from the show are intercut with archive material shot throughout Stritch's career, as well as rehearsal footage documenting how the show took shape. Produced for the premium cable television service HBO, Elaine Stritch at Liberty was screened at the 2004 Tribeca Film Festival.