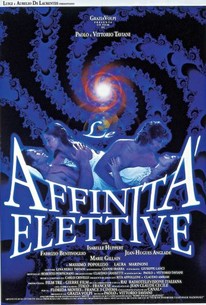 This French-Italian romantic drama is faithfully based on an early 19th century Goethe novel about the destruction of a married couple. They are Charlotte and Edouard, an aristocratic couple who married late in life and happily lives in a lovely Tuscan villa. Their peaceful, marital bliss is interrupted when Othon (Edourd's closest friend) and his goddaughter Ottilie, who was raised in a convent, arrive for an extended visit. The pregnant Charlotte immediately finds herself drawn to Othon while Edouard is attracted to the girl. As they act upon their impulses a tragedy ensues.

Giancarlo Carboni
as Doctor
View All

If you can believe it, here's a Goethe story that is insipid.

"Elective Affinities" starts with Carlotta(Isabelle Huppert) and Edoardo(Jean-Hugues Anglade) being reunited after twenty years apart and deciding, why not, let's get married. A year later, they are still in the state of their marriage where they rarely leave the bed. But Edoardo has to get up to invite his friend Ottone(Fabrizio Bentivoglio) to their villa. While the two men get to hang out a lot, Carlotta feels increasingly left out. So she invites her adopted daughter Ottilia(Marie Gillain) to restore the balance but that only makes things worse. "Elective Affinities" begins well enough with the opening credits segueing nicely into the opening scene. However, the movie gets increasingly heavy handed as it goes along while also telegraphing its punches. So, maybe there are no shortcuts in life but does that mean that such intelligent, forward thinking people can act so incredibly stupid? In the end, it just goes to show you that you can never plan for every eventuality.