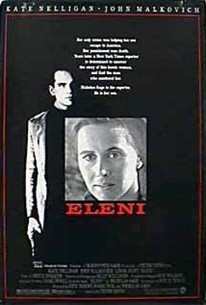 Based on the autobiographical novel by Nicholas Gage, Eleni traces Gage's search for the truth behind the execution of his Greek mother Eleni. John Malkovich plays Gage (herein referred to only as Nick), a New York Times journalist assigned to cover a border war in Albania. Intimately familiar with his beat--it's where he grew up--Nick periodically flashes back to his childhood, and his memories of his late mother Eleni (Kate Nelligan). Not at all concerned with politics, Eleni goes to extreme lengths to shelter her children from the ravages of civil unrest. For attempting to smuggle her kids out of the country, Eleni is arrested and executed. Back in the present, Nick manages to locate local politico Katis (Oliver Cotton), the man who signed Eleni's death warrant. He wangles his way into Katis' confidence, then prepares to kill the man--but he's in for a surprise, and something of an epiphany.

Anthony Stamboulieh
as Minister of Justice

Michael Chesden
as Nationalist on Horse

Miguel Pedregosa
as Officer on Horse

Malkovich is developing into one of the great strong quiet zones of contemporary film acting. His characters internalize their feelings.

Eleni fails to rightly capture the significant turmoil wreaked by Communism on Greece during the 1940s and 1950s, and may be most notable as a conversation starter on these talking points.

An extraordinary movie about a heroic Greek woman with an outstanding performance by Kate Nelligan.

There are no featured reviews for Eleni at this time.