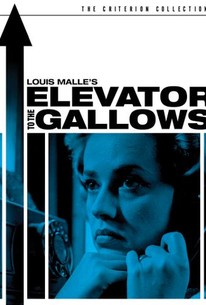 The feature-film debut of famed director Louis Malle is an interesting, modern film noir with the classic theme of lovers plotting to kill the husband and make it look like suicide (reminiscent of The Postman Always Rings Twice). Jeanne Moreau, as Florence Carala, gives an astonishing performance, perverse but naive as she leads her young lover down a path that can only lead to doom for both of them. Malle and his cinematographer Henri Decae make extensive use of Paris at night, giving the film the feel of claustrophobia and desperation reminiscent of the classic noir films. The excellent score by Miles Davis adds to the entire effect of this mystery thriller. ~ Linda Rasmussen, Rovi

Hubert Deschamps
as Attorny of State

Jean-Claude Brialy
as Chess player at motel
View All

Critic Reviews for Elevator to the Gallows (Ascenseur pour l'échafaud)

A classic European film noir with an irresistible score by Miles Davis, it builds tension from a series of seemingly minor mistakes that echo the political/military context of the postwar era.

Elevator to the Gallows, killer stuff.

Lift to the Scaffold (Ascenseur pour l'échafaud) was the perfect opening to the French New Wave in 1958, sashaying in to a jazz score from Miles Davis and starring Jeanne Moreau as a mistress-in-peril.

A stylish thriller most famous for its excellent score created by Miles Davis.

It's a compelling but gangly first film, with a few head-scratching plot holes, but those complaints seem insignificant in the glare of the Paris lights, the flare in Jeanne Moreau's eyes and the blare of Miles Davis' trumpet.

The experiencing of watching Malle's 1958 debut is akin to that of watching a preordained outcome, much like an academic thesis, work itself out, with much of the suspense residing all in the journey rather than the destination.

Malle made his feature directorial debut with this assured thriller, which recalled both the poetic realism of Marcel Carné and the brooding menace of American films noirs.

Striking to look at, with each frame resembling an intricately designed photograph ...

Audience Reviews for Elevator to the Gallows (Ascenseur pour l'échafaud)

Elevator to the Gallows is a solid French thriller, that is very similar to Hitchcock movies. There's a lot of suspense, but no twists and turns. We are told everything that it is going on, but there's still a lot of suspense. All of the performances are very good especially Jeanne Moreau. Miles Davis' score is fantastic and suits the movie well. When people say, "they don't make them like they used to;" this is the type of movie that they are referring to.

a hitchcockian thriller that was not only malle's first film but an anomaly in that he never touched the genre again. what he accomplished with this film at 24 years old is remarkable in that so few other crime stories have ever touched the flawless execution and tension building that we find in this film. the miles davis score is perfect as a tone setter considering he recorded the entire thing in one day. the way the film was shot, the intricacies of the plot, and the excellent acting all come together to form a perfect movie. usually in noir style films the detective character is an emphasis, but the great lino ventura blends into this highly detailed story in an appropriately subtle way. a masterpiece of film making.

Many elements of this film were breakthroughs - and it is a wicked cool film. But... I can't help thinking it was a little slight and really relied on those very elements - Jeanne Moreau's haunting performance, the brilliant camerawork and Miles' genius score to carry it. What am I saying? Never mind.