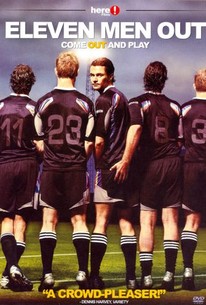 A sports star's career takes a sudden roller coaster ride when he makes a very unexpected announcement in this comedy from Iceland. Ottar Thor (Bjorn Hlynur Haraldsson) is a well-known soccer player whose life off the field isn't as successful as his career in football. Thor's marriage to a one-time beauty queen ended in a bitter divorce, his 13-year-old son Magnus (Arnmundur Ernst) would rather play video games than talk to his dad, and his obnoxious father and brother have moved in to his home. One day, while talking to a reporter after a game, Thor mentions that he's gay without really thinking about what might happen, and suddenly his world is turned upside down. The owners of Thor's team, as well as his fellow players, turn against him and kick him off the squad, while his family is more than a bit taken aback. Still eager to play, Thor takes up an invitation to join a semi-pro team coached by a friend, which already has a few gay players. Thor's presence on the team, and the media circus over his decision to come out, put a new spotlight on the gay footballers, and several more decide to move out of the closet and onto Thor's team. Suddenly Thor is a sports star again with a winning record (though a few victories come from forfeits, since some clubs are unwilling to take the field with a queer team), and his old team decides to challenge them to a special match...that just so happens to coincide with Gay Pride Day. Meanwhile, Thor decides to act on his attraction toward one of his teammates, but discovers that his dreamboat isn't much of a catch off the field. Eleven Men Out (aka Stratkarnir Okkar) received its North American premier at the 2005 Toronto Film Festival. ~ Mark Deming, Rovi

Damon Younger
as Brósi
View All

Critical Consensus: Beowulf is Certified Fresh; Magorium Short on Magic; Cholera is Under the Weather

[Eleven Men Out] thoughtful and funny characters, something that should give this droll drama appeal beyond a niche gay audience.

There's at least a half dozen movies fighting for attention here, none of them particularly appealing.

A too-thin dramedy with good intentions but poor results.

If you detect anything fresh or original in terms of character or story development, you're probably not watching this movie.

Douglas addresses rather serious issues with warmth and humour in this engaging football comedy, which doesn't actually show much football action.

While Eleven Men Out is an interesting look at how Icelandic society deals with homosexuality, it doesn't hold together as solid entertainment for U.S. audiences.

Although a very serious subject, it is often approached with comedy. This one is more successful than a lot of television sitcoms have been in conveying the challenge and the rewards of the spiritual practice of openness.

The film might be trying to push boundaries in terms of male nudity, but no amount of penises can save this wannabe comedy that is just not funny.

Nothing particularly subtle or different here.

So disappointing. The story has potential, some good ideas are there, but there is no coherence in the storyline, the filming is bad, the stereotypes are ablaze (or was this camp? I couldn't tell), the dialogues are trite. The latter could be attributed to the bad dubbed version I saw, everything else couldn't. Unfortunately a bad, bad film based on a good idea. If you want to see a gay-themed football movie, I recommend the German film "Guys & Balls", which is a hilariously campy and sweet take on the same subject matter.