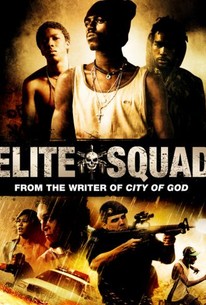 Critics Consensus: Brutal, action heavy, Brazilian cop film with a pointless voiceover. Lacks flair, overdoes the violence and is never quite sure where its morals lie.

Critics Consensus: Brutal, action heavy, Brazilian cop film with a pointless voiceover. Lacks flair, overdoes the violence and is never quite sure where its morals lie.

Critic Consensus: Brutal, action heavy, Brazilian cop film with a pointless voiceover. Lacks flair, overdoes the violence and is never quite sure where its morals lie.

For decades, the South American metropolis of Rio de Janeiro, Brazil, has clocked in as staggeringly lethal. Its violence-scarred and blood-strewn ghettos (or "favelas") are regularly patrolled by crazed drug gangs whose open-fire battles with police often spread out onto the main thoroughfares and turn ordinary civilians into casualties. In response, the Brazilian government formed a crack paramilitary force known as the BOPE (Batalhão de Operações Policiais Especiais, or Special Police Operations Battalion) to take matters into its own hands. Now, director José Padilha's social-consciousness drama Tropa de Elite carries viewers inside of BOPE for a scathing indictment of the cycle of violence that permeates Brazilian society, scripted by 12-year-plus BOPE veteran Rodrigo Pimentel. Wagner Moura (Hector Babenco's Carandiru) stars as Captain Nascimento, the leader of a BOPE unit who is seriously considering retirement in the face of his impending fatherhood. In an effort to pick his successor, he looks to two younger recruits, part-time law student André Matias (André Ramiro) and the bellicose hood Neto (Caio Junqueira) -- but soon recognizes that these naïve men will need to seriously mature before one can take the reins. Inevitably, the events that each encounters on the roughshod Brazilian streets -- particularly a trip to clean up some of the neighborhoods in anticipation of the pope's visit -- begin to shape and redefine them in ways that neither can even begin to anticipate. Meanwhile, BOPE grapples with its own internal problems -- particularly the extreme corruption and underhandedness of each squad leader, whose sideline activities range from resupplying weapons to gangs to the racketeering of strip clubs. ~ Nathan Southern, Rovi

For nearly two hours, Padilha bombards viewers with senseless, sickening violence for its own sake.

Elite Squad is a relentlessly ugly, unpleasant, often incoherent assault on the senses from Brazil.

Elite Squad can't decide whether it wants to pull the lid back on what urban decay has wrought or simply open up a can of whup ass.

Elite Squad succeeds at putting the worst of the violent spectacles on screen, primarily through a series of nicely staged shootouts and torture sequences.

[José Padilha] recariously pitches the squad's brute force as less a necessary evil than the outgrowth of an existing evil -- a no-win situation that mocks liberal ideals and warps conservative pragmatism into domestic terrorism.

It bears a resemblance to viscerally exciting seventies urban thrillers like The French Connection, in which only the fascists could do what needed to be done.

It keeps me interested with its sample of slum violence and police brutality, but it is affected by a lack of character development and a regular narrative that seems to repeat itself like a crime wave in the favelas. [Full review in Spanish]

A satisfactory enough cop movie, but not one that people will still be name checking years hence

Given that Brazil, as a Latin American moviemaking powerhouse, steadily produces vibrant, vital films of real impact and humanity, it's a crime itself that Elite Squad may be the only Brazilian film that American audiences see this year.

A depressing film that celebrates brute strength as the only means to stem the tide of violence and crime in Rio de Janeiro.

With no star names and a tough subject, it will be hard sell despite being a runaway hit on its home turf.

A poor man's City of God that suggests the only answer to the problems of Brazil's slums are blazing guns wielded by a neo-fascist police force.

To dismiss this uncomfortable film as "fascist" like many did (and still do) is in itself an unfair and dangerous simplification, given the complex picture that Padilha draws of Brazilian society - a tragedy, actually - where violence seems to be the only way to combat crime and violence.

This is documentary-style filmmaking at it's most raw and forceful; it'll hit you like a freight train! "Elite Squad" is a landmark of Brazilian cinema. Picking up where "City of God" left off, this film inhabits the same world as that masterpiece but plays by it's own rules and has a fresh new perspective to share. The constant comparisons are almost unjust considering what a singular effort Director Padhilha's movie is. It's got a sense of tension and urgency that most Hollywood action pictures yearn for.

An excellent and spectacularly entertaining movie. It`s truly terrific to watch and dose not get boring for a minute and keeps you on the edge of your seat. It packs a pure power-punch of intensity that knocks you flat out with its explosive action, strong performances and brutal honesty. Movies don't get more real or more powerful than this. A masterpiece. Director, Jose Padilha crafts an stylish, dark and gripping police drama like no other. A groundbreaking achievement that earns it`s right to be called a classic. A heart-pounding action-packed thrill-ride that's loaded with pulse-pounding drama and thunderous gun-battles that take you to the limit. A total adrenaline-rush from start to finish. A hard-boiled and exhilarating piece of work that deserves attention. It shows that grim reality of gang-related violence, inner city and police politics that the necessary evil they need to achieve their objectives. The cast is extraordinary. Wagner Moura gives a powerful and sensational performance. I loved this movie. It rocks and rocks profoundly.

In the slums of Rio de Janeiro drugs are the currency of choice and the police are in on the action, but when things get really bad it is the job of the Elite Squad to go in and sort out the mess. We follow Captain Nascimento who is struggling to find a replacement as he wishes to quick for when he becomes a father. Two of the potential new recruits are Matias, a dedicated law student and Neto, a headstrong cop stuck working as a mechanic. The film is a brutal look at the hellish lives in the slums, as well as the danger the police put themselves through everyday. We see the Elite Squad, known as BOPE, acting incredibly tough and shooting to kill, but we never once doubt their methods. The film is a thrilling ride, but it is hampered by what seems like a hastily added voice-over which explains everything that is going on, making long periods of the film sound like an audiobook. It also feels like the first chapter of a much larger story, which in a way is a good sign as it left me wanting much, much more.I enjoyed every single character but I really do think the two new recruits should have been the focus throughout.