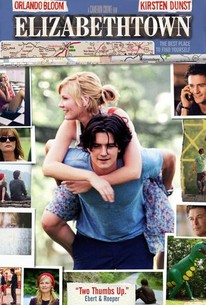 Critics Consensus: This story of a floundering shoe designer who returns home for a family tragedy gets lost in undeveloped plot lines and lackluster performances.

Critics Consensus: This story of a floundering shoe designer who returns home for a family tragedy gets lost in undeveloped plot lines and lackluster performances.

Critic Consensus: This story of a floundering shoe designer who returns home for a family tragedy gets lost in undeveloped plot lines and lackluster performances.

Cameron Crowe's Elizabethtown stars Orlando Bloom as Drew Baylor, a successful shoe designer, who as the film begins suffers a profound career setback that earns him the ill will of his boss (Alec Baldwin), and he learns that his estranged father has passed away. On the flight to his hometown, he makes the acquaintance of an eccentric stewardess named Claire (Kirsten Dunst). Susan Sarandon plays Drew's mother, a widow with an unusual sense of how to properly mourn her deceased husband. During the course of his stay with his extended family, Drew rediscovers what is important about life and falls in love with Claire.

Michael Naughton
as Another Cousin

Elizabethtown [is] a tone-deaf, miscast and interminable romantic comedy from the usually beguiling Cameron Crowe.

The hero's nuclear family and kooky rural relatives are so sketchily conceived that none of the intended comedy works, and the balance of the movie is given over to one of Crowe's sugary romances.

So curious, and such a disappointment.

Crowe's capable of much better than this; let's hope he gets back on track with the next one.

The entire enterprise smacks of wish-fulfilment provoked by middle-age male guilt. Uplifting, it most certainly ain't.

Crowe is still a master navigator of swampy territory, and any movie that can warm the heart and tickle the funny bone without selling its soul is to be cherished, warts and all.

The overriding feeling is that Crowe simply wanted to impress audiences with cuts from his personal music collection.

The much-derided tragicomedy/romance sunk several careers, but it hums with its own quirky, never-may-care sense of authenticity.

Crowe has a very talented cast at his disposal and, for the most part, uses them wisely.

... it captures the imperfect, specific nature of the human experience in the face of life's saddest occasions.

Much maligned but surprisingly entertaining...

It's the fashion today for interpersonal dramas to go for bathos and high-stakes emotional conflict as characters cry out their darkest secrets to each other ... but director Cameron Crowe has taken a different tack.

Things I Liked About "Elizabethtown" Upon Second Viewing 1. Orlando Bloom's performance. Despite having contracted Orlando Bloom Fever at the beginning of his mainstream career, with each "Pirates" and "LotR" installment, I got wearier and wearier of his pretty boy, dainty-featured backpfeifengesicht - German for "a face in desperate need of a fist." I felt a bit of that repulsion in the first few minutes of this viewing, but I eventually made peace with the delicate flower of his visage and was really impressed with his acting, especially during the road trip montage when he's alternately crying and laughing to himself. 2. The heartwarming midwest community. I saw this for the first time in northern Virginia, so perhaps I didn't understand the midwest mentality until I lived in Indiana. My daily life isn't quite like the family portrayed here, but even I was moved at the sequence of Drew first driving into Elizabethtown and seeing everyone waving and smiling at him with faces of seeming recognition, welcoming back the Prodigal Son. 3. The memorial ceremony turned into raucous fire and blazes, accompanied by Ruckus's indomitable cover of "Free Bird." 4. Claire's thought and effort of creating an emotional road trip for Drew to scatter his father's ashes. Things I STILL HATE About "Elizabethtown" Upon Second Viewing 1. Kirsten Dunst. I didn't find her or her character, Claire, charming, cute, deep, or romantic (like NaPo's Sam in "Garden State" and even she's only likeable in small doses). "Elizabethtown" came during that dryspell after Kiki had outgrown her lost prodigy depth and bubbly cheerleader charm - which yielded such lifeless and/or annoying performances as in "The Cat's Meow," "Spiderman," "Eternal Sunshine," "Wimbledon," and this - and before she rebirthed herself as melancholic muse for the likes of Sofia Coppola and Lars von Trier. Her Kentuckian accent is terribly...not, and she plays Claire as much too self-deprecating (half-laughing through the big "I like you!" line), as if the actress didn't even buy the character's quirkiness. Claire herself is just a girl. She recites some manic pixie dreamgirl juxtapositions that seem delightfully incongruous, but then prove to be ACTUALLY incongruous and faux-inspired, e.g. "I'm impossible to forget, but I'm hard to remember." "Men see things in a box, and women see them in a round room." Is she? Do they? 2. The so-called fiasco involving Drew's shoe design. There's so much pretentious, aphoristic talk about fiascos and failures, but what exactly WAS the fiasco? What was wrong with the shoe? How could such a promising young podophile possibly think this vaguely Skechers Shape-Up prototype would work, and how did no one else notice its Achilles' Heel, if you will? The fact that none of this is ever revealed shows how little legitimate research on the shoe industry Cameron Crowe did. For one, it's lazy writing and directing. For two: see below. 3. The light treatment of suicide. This needn't have been a sadder movie, but it IS realistic at least, for all intensive porpoises. Without the grounding exploration of what failure means in the shoe industry, Drew's subsequent obsession with suicide is purely comical and absurd, not intellectual or existential. I'm never actually worried for or in suspense about his mortality. Also, the repercussions of the fiasco are only limned in monetary terms. Drew never expresses critical doubt about his mental, intellectual, social or self worth, which are more compelling problems than just the Benjamins. Even after Claire admits her burgeoning feelings for him, his immediate response is to blithely cite his date with destiny? Suicide's just a quirky appointment, not something that he is seriously debating cuz I'm sure after meeting his manic pixie dreamgirl, he'd be more apt to wine and dine the girl, not slice and dice his veins. 4. Hollie's tap dance. Okay, I normally love DANCE in movies, but I just wish this number was a little better. I know Hollie had just learned to tap dance on a whim in her grief, but the choreography was more soft shoe than tap. After her standup routine (which I didn't like although I do understand its purpose of diffusing grief), I just wasn't moved or impressed by the dance, and I wanted either more emotion or better execution. 5. The "last look" at the memorial. I was already irritated by the quirkiness of Drew "collecting last looks" and Claire clicking her mental camera, and Crowe managed to mess it up in the one place it could work. Amid the smoke, sprinklers, and Skynyrd, Drew looks up to the stage one last time, presumably at the sad but oddly jubilant tableau of his father's smoldering portrait and this utter shitshow, and thinks that this is a good last look, only to reveal Claire as the subject of his observation. It's not even that good of a last look, and it's clearly not the last time she'll be seeing him. I could buy it if it was a goodbye to his father and to the vagaries of the midwest. 6. The fact that everyone loves the soundtrack. I think it's overrated. Many of the songs sound like the same indie moaning. I prefer "Vanilla Sky"'s soundtrack.

This is my second time watching this and 1 hour in I am removing this from the DVD player and my collection. It totally bores the hell out of me. I like Kirsten Dunst, and she is charming here as Clare, but it is not enough to save this film and she's not in it enough. Unconvincing on almost every level, Orlando cannot hold a film for two hours.

The movie sucked and made kittke sense by the soundtrack was excellent, shame James Brown with thats life didn't make the sound track. Movie gets 2 stars, Soundtrack gets 5 stars

I didn't expect that this film would be this good, but I was surprised. I thought that this would be your regular run of the mill chick flick, it really wasn't. The film was a great blend of comedy and drama and the performances were well done. Cameron Crowe has made a terrific film with a different style than your regular romantic film. I thought it was a fine change of pace from other films. The cast here are terrific in the parts they play. I thought that Cameron Crowe was terrific for the director's chair, and he creates a film that is sad, funny and heart warming. Elizabethtown definitely exceeded my expectations. This is a great film is a must see film and there's plenty of scenes to like about this film. I enjoyed the scene where they play Skynyrd's Freebird at the memorial. For me that was one of the best parts of the film. I enjoyed this film very much, and I didn't expect to like this film, whatsoever, but I was surprised I did. The reason that the film works so well is because of the talented cast, and great direction from Cameron Crowe. Elisabethtowm is a fun, and sad drama comedy film that is better than your usual films of the genre, because it manages to be quite different. If you love Cameron Crowe's work, then give this one a shot, it's a fun, heartwarming and sad film, but in the end you feel uplifted and happy. A very good hearted story Elizabethtown is a wonderful film with a great cast and a surprising story. The film is not your usual romance film, and it's a refreshing idea to the genre. A must see.