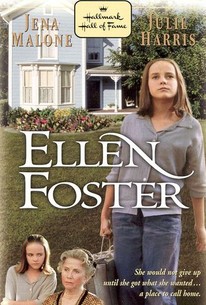 Filmed in Vancouver, this Hallmark Hall of Fame takes place during the '70s in the U.S. After the death of her mother, Charlotte (Glynis O'Connor), 10-year-old Ellen Foster (Jena Malone, who narrates) suffers abuse from her alcoholic father (Ted Levine) and is ill-treated by her maternal aunts Nadine (Debra Monk) and Betsy (Barbara Garrick) and also by Nadine's mean daughter Dora (Kimberly Brown). Ellen is sent to live with her grief-stricken grandmother Leonora (Julie Harris), but her problems continue since the mean-spirited Leonora blames Ellen for Charlotte's death. Harry Nilsson's song, "Remember Christmas," is featured. This TV movie premiered December 14, 1997 on CBS.

There are no critic reviews yet for Ellen Foster. Keep checking Rotten Tomatoes for updates!

There are no featured audience reviews yet. Click the link below to see what others say about Ellen Foster!