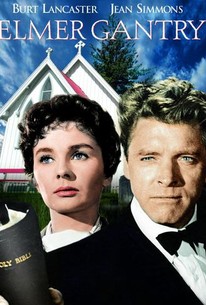 Elmer Gantry (Burt Lancaster), a drunken, dishonest street preacher allegedly patterned on Billy Sunday, wrangles a job with the travelling tent ministry conducted by Sister Sharon Falconer (Jean Simmons). Thanks to Gantry's enthusiastic hellfire-and-brimstone sermons, Sister Sharon's operation rises to fame and fortune, enough so that Sharon realizes her dream of building her own enormous tabernacle. These ambitions are put in jeopardy when a prostitute (Oscar-winning Shirley Jones), a former minister's daughter who'd been deflowered by Gantry years earlier, lures Gantry into a compromising situation and has photographs taken. It took several years for any Hollywood studio to take a chance with Sinclair Lewis' novel, and when it finally did arrive on the screen, producer/director Richard Brooks was compelled to downplay some of the more "sacrilegious" passages in the original. Also appearing in Elmer Gantry are Arthur Kennedy as an H.L. Mencken-style atheistic journalist, and Edward Andrews as George Babbitt, a character borrowed from another Sinclair Lewis novel. ~ Hal Erickson, Rovi

Norman Leavitt
as Friend
View All

The film pulls few punches in its story of the hypocrisy, materialism, and opportunism at the heart of the evangelical world of Bible-thumping barnstorming revival troupes

Brooks honors the spirit of Lewis' cynical commentary on circus-type primitive exhortation with pictorial imagery that is always pungent. He also has written dialog that is frank and biting.

This gets progressively nastier and winds up with an impressive hellfire finish.

Brooks was the ultimate vulgarizer of serious literature.

With a host of fine performances, and a strong sense of period and place conveyed by John Alton's lush camerawork, there's still plenty to enjoy.

The briskly paced drama of a religious opportunist, his colleagues and his times utilizes the tools of the motion picture in expert fashion.

Every preached word that comes out of Lancaster's mouth elevates the film's dramatic potential and illuminates the scenes like a miracle fallen from heaven. [Full review in Spanish]

The title-role character, a preacher with a weakness for wild women and whisky, is more believable in scriptwriter-director Richard Brooks' film than he was in the Sinclair Lewis novel; the part is played with skill and gusto by Burt Lancaster.

Alas! I found it crude and cumbersome, vulgar and overblown (a mistake in taste was to do it in color), and a perfect example of that having-it-both-ways irreality.

The whole thing bristles with rather superficial symbolism and even Jean Simmons's radiant, and in this case hearty, charm as an Aimee Macpherson figure.

If not for the amazing performance of Burt Lancaster, the film would collapse under its own self-righteousness.

Greatly enhanced by the spirited Oscar performance by Burt Lancaster.

A snake-oil preacher woos a revivalist, and together they build a following, but will his dishonesty hurt their partnership more than his charisma helps their cause? Burt Lancaster's finest performance showcases his over-the-top antics and his remarkably seductive charm and his ability to convey a soulful depth of character. He rises to the challenge of the perfect part for his talents. Jean Simmons, always demure, also gives a strong, subtle performance as Sister Sharon Falconer, a well-meaning but manipulated revivalist. The film's satire pillories ignorance and theft more than it levels its glass at religious fervor. It doesn't suggest that religion is bullshit because we see a proper refutation in the person of well-meaning religious people, but it does say that people are no more easily manipulated than when they are are pushed by either faith or their genitals. Seems like apt criticism to me. Overall, your patience with this film will depend on your reaction to Lancaster's antics and the film's thesis.

I find it very difficult to believe that Elmer Gantry made in to movie screens in 1960. It almost seems like a lynchpin or things to come in the decade. Religious satire mixed with the amazing performance of Burt Lancaster. Unbelievable. There's also a great performance from Jean Simmons, as well as fantastic direction from Richard Brooks. There's also some great photography and location work on display to boot. Oh, and a fantastic script from beginning to end. A brilliant little film.

Richard Brooks mesmeriising adaptation of Sinclair Lewis's book (--- what's killing Christianity is not unbelievers on the outside but rather the phony piety of those professing belief---) is chock full of noteworthy performances and riveting scenes as a silky smooth talking con man joins a Christian tent revivalist across America's Bible Belt. The film actually begins with a printed warning to keep youngsters away ... nuff said.

This movie has a good story and actors, I didn't get to see the end, though, so I should watch this movie again.