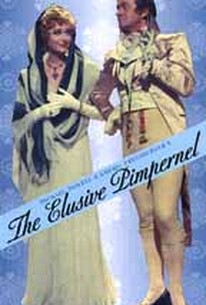 In this costume adventure set in France during the Reign of Terror, a mysterious man known only as the Scarlet Pimpernel rescues noblemen from the guillotine and leads them to safety across the English Channel. Chauvelin (Cyril Cusack) is determined to unmask the Pimpernel and bring him to justice. When evidence begins to suggest that the hero is actually foppish Sir Percey Blakeney (David Niven), Chauvelin blackmails Percey's wife, Marguerite (Margaret Leighton), into cooperating on the threat that he'll expose the criminal activities of her brother Armand (Edmund Audran). However, Marguerite doesn't much care for her husband, hardly believes he could be the heroic Pimpernel, and is startled when she finds out that he truly is the masked vigilante. The Elusive Pimpernel was originally shot in color as a musical, but the musical numbers were cut before the film was released, and the picture's American distributor chose to make only black-and-white prints (though the current home-video release is in color). ~ Mark Deming, Rovi

Jack Hawkins
as Prince of Wales

Tom Duggan
as Earl of Sligo

Terry Alexander
as Duke of Dorset

Archie Duncan
as Man in bath

Robert Griffiths
as Trubshaw
View All

By slowing down the pace, adding unnecessary complications to the plot, and providing some prolonged, lavish but tasteless court scenes, the quality of excitement which should carry the film is quite lost.

There are no featured reviews for Elusive Pimpernel at this time.