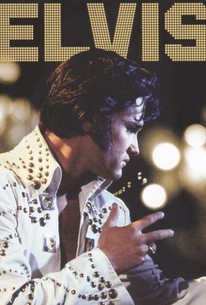 The first volley in the never-ending "Presley movie" blitzkrieg, the made-for-TV Elvis: The Movie stars Kurt Russell as the King, Season Hubley as Priscilla, Pat Hingle as Col. Parker, Shelley Winters as Elvis' mom, and Bing Russell (Kurt's real-life father) as Elvis' dad. The film recounts Presley's life from age ten to his 1969 Vegas comeback. Presley imitator Ronnie McDowell expertly dubs in Kurt Russell's renditions of "Love Me Tender," "Heartbreak Hotel," et al. When first telecast on February 11, 1979, the ratings for Elvis: The Movie went through the roof, even beating out a competing telecast of Gone With the Wind.

Will Jordan
as Ed Sullivan

Charlie Hodge
as Himself

Respectful, unpretentious and elegant (a Carpenter characteristic), if somewhat ungainly in its substitution of California real estate for Memphis and Mississippi locations, the modestly budgeted 'Elvis' remains the definitive screen portrayal of Presley.

[John] Carpenter... puts the dramatic focus on the relationships and tricky social dynamic with the male friends who became Elvis support group and entourage.

John Carpenter and Kurt Russell's first team-up is this thumbnail overview biopic to Tupelo's baritone bomber and his ever-so-fraught-with-rumor behind-the-scenes relationships: his Ma, his manager, his monkeys, and his wife. Though Russell's King is disconcertingly spot-on still the piece plays exactly how it was intended to: like a TV movie.