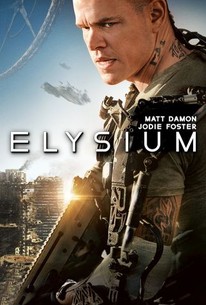 Critics Consensus: After the heady sci-fi thrills of District 9, Elysium is a bit of a comedown for director Neill Blomkamp, but on its own terms, it delivers just often enough to satisfy.

Critics Consensus: After the heady sci-fi thrills of District 9, Elysium is a bit of a comedown for director Neill Blomkamp, but on its own terms, it delivers just often enough to satisfy.

Critic Consensus: After the heady sci-fi thrills of District 9, Elysium is a bit of a comedown for director Neill Blomkamp, but on its own terms, it delivers just often enough to satisfy.

In the year 2154, two classes of people exist: the very wealthy, who live on a pristine man-made space station called Elysium, and the rest, who live on an overpopulated, ruined Earth. The people of Earth are desperate to escape the planet's crime and poverty, and they critically need the state-of-the-art medical care available on Elysium - but some in Elysium will stop at nothing to enforce anti-immigration laws and preserve their citizens' luxurious lifestyle. The only man with the chance bring equality to these worlds is Max (Matt Damon), an ordinary guy in desperate need to get to Elysium. With his life hanging in the balance, he reluctantly takes on a dangerous mission - one that pits him against Elysium's Secretary Delacourt (Jodie Foster) and her hard-line forces - but if he succeeds, he could save not only his own life, but millions of people on Earth as well. -- (C) Sony

[T]he visuals are breathtaking and there's a mid-movie shoot'em-up that's one of the best in the genre.

Any thematic audacity is snuffed out by action sequences that you can now buy at Dollar General.

It's a long time since any major studio closed the silly season with a $115 million Marxist polemic.

Just as the creation of a future nightmare, one that disturbingly resembles the world we already know, Elysium is masterful - definitely worth seeing.

You don't know where to look next, or to listen, in this movie. Every actor seems to have come from a different rehearsal room.

From my perspective, not only is Elysium a worthy companion work to District 9, but it operates as a consistently more balanced and accomplished production on its own.

Blomkamp has weakened his film and made it less appealing to audiences through his insistence on dull, pumped-up action sequences.

I'm comfortable calling Elysium a film that doesn't work, but which I love to watch.

The premise is nothing revolutionary, and even highly reminiscent of most dystopian presentations, but still begs to be explored in greater depth.

Never crash lands despite appearing constantly on the verge of doing so.

As much as many of the most powerful works of science fiction serve as allegory, in the case of Elysium, the message is so blunt, so domineering, that it not only distracts from the story and characters, it actively hinders them.

Aside from Jodie Foster's over-the-top performance and an irritating shaky camera that makes it hard sometimes to follow what is happening in the action scenes, Blomkamp really hits the mark with this efficient sci-fi that is entertaining and even thought-provoking.

So much noise. So little purpose. Very little entertainment value.

I love Matt Damon. I love Sci-fi. Not sure I like them together, however. Didn't hate this, but I sure wouldn't recommend it. Not all his fault, though. There were a couple people in this that really brought down the film with their sad acting...Jodie Foster, included.