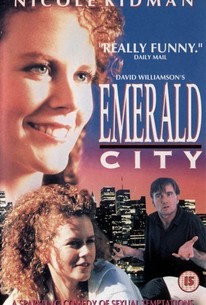 Australian author David Williamson adapted Emerald City from his own stage play. The title may conjure up images of the Wonderful Land of Oz, but the plot is set in the Munchkin-free Australian film industry. John Hargreaves stars as a prosperous screenwriter who is perfectly willing to accept the obscene gobs of money thrown at him. One day, however, he decides that he's a sellout, and attempts to turn out something of meaning and value--and uniquely Australian. But he runs up against an industry with both eyes on the valuable American market. There are laughs in Emerald City, but they have a hollow ring; this hit too close to home with many Australian filmmakers to be considered a comedy.

This was the year of living successfully for Nicole, who starred in Dead Calm immediately after Emerald City, and launched her international career.

There are no featured audience reviews yet. Click the link below to see what others say about Emerald City!