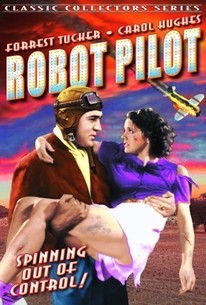 Originally titled Emergency Landing, PRC's Robot Pilot affords an early leading-man opportunity to Forrest Tucker. He plays a test pilot, working on behalf of inventor Emmett Vogan. When Vogan's radio-controlled plane proves a failure, Tucker valiantly offers to keep trying. Carol Hughes and Evelyn Brent are the anxious ladies who await the results of Vogan's experiments, while villainy of a Germanic nature is provided by I. Stanford Jolley and Stanley Price. Also on hand is young Jack Lescoulie, light years away from his announcing chores on NBC's The Today Show.

I. Stanford Jolley
as Karl

Paul Scott
as Colonel
View All

This is Forrest Tucker's second film and first starring role.

There are no featured audience reviews yet. Click the link below to see what others say about Emergency Landing!