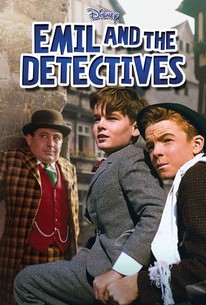 Emil and the Detectives Photos

Erich Kastner's oft-filmed children's story Emil and the Detectives was given the Disney treatment in 1964. Though the plot is still set in Berlin, the younger characters have been extensively Americanized, none more so than the title character (played by Bryan Russell) and aspiring teenaged detective Gustav (Roger Mobley). Travelling by bus to visit his aunt, Emil loses an envelope of money to sneak thief Grundeis (Heinz Schubert). The boy enlists the aid of a gang of young detective-story aficionados, led by Gustav, to locate the thief. This leads to a perilous adventure when it turns out that Grundeis is in league with an erudite master criminal known as The Baron (Walter Slezak), who is planning a major heist. The film waves uncertainly between pure-and-simple kiddie entertainment and a dead-serious "caper" effort; surely some of the worldly, cynical dialogue spoken by Walter Slezak went way over the heads of Disney's 8-to-14-year-old target audience. Still, the performances are lively and the Berlin locations well chosen. Emil and the Detectives wasn't as successful as Disney's previous release Mary Poppins, but it managed to make back its cost overseas.

Critic Reviews for Emil and the Detectives

[Director Peter Tweksbury] has kept the kiddies from gushing too coyly, suppressed the mugging of a comic trio of thieves, photographed the fresh Berlin setting in effective color, and juxtaposed suspense and wit with a nice, bouncing pace.

The children will howl and grown-ups will look on with smiling indulgence.

Slezak and his pals, known as the three skrinks, are amusing in their blundering progress and the many kids respond enthusiastically to Peter Tewksbury's direction.

It is a picture that will intrigue and delight children as well as adults.

There are no featured reviews for Emil and the Detectives at this time.

Emil and the Detectives Quotes