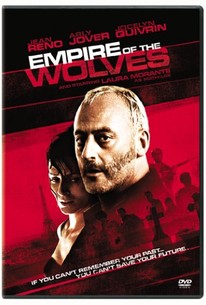 Empire of the Wolves Photos

When the wife of a high-ranking government official begins experiencing chilling visions that are somehow tied to a series of murders around Paris, her fate becomes intricately tied with that of the two police officers investigating the gruesome crimes in this horror-flavored thriller from the producer of The Professional and starring Jean Reno. Anna Heymes' (Arly Jover) memory is failing, and her dreams are plagued by unspeakable images of murder. Meanwhile, in the Turkish district of Paris, upstanding police officer Nerteaux (Jocelyn Quivrin) and his questionably motivated partner, Schiffer (Reno), investigate the savage murder of three clandestine Turkish laborers. As the investigating officers uncover an important clue implicating the Turkish mafia in the crimes, Anna awakens to discover that her appearance has been drastically altered by a mysterious plastic surgeon. As the link between Anna and the Turkish murder victims slowly comes into focus, the truth about her nightmarish past sets into motion a terrifying sequence of events. ~ Jason Buchanan, Rovi

Critic Reviews for Empire of the Wolves

...isn't nearly as much fun as one imagines it's supposed to be.

The only way to make this film any worse is to listen to the dubbed version, which turns Reno's deep growl into a lilting voice that wouldn't be out of place on an episode of Friends.

Audience Reviews for Empire of the Wolves

A stylish, bone-chilling , exhilarating and heart-pounding edge of your seat thriller. A riveting, hard-boiled and intense action-packed ride. Jean Reno is sensational, giving one of his best and toughest performances. It's expertly well-crafted and well-developed. An explosive film that's loaded with mind-blowing suspense and adrenaline-pumping action. It grabs you and dose not let go and leaves you hanging in with sheer terror. It's compelling with a great mood and atmosphere, gripping with a great story and characters that's wickedly entertaining all the way through. A thrill-ride that actually thrills.

Ok film,very stylish.But is let down by a muddle and confusing story.Jean Reno on fine performance here.Is worth checking out...

This is a kick ass movie. All in English subtitles from the French language, Empire of the Wolves is full of action, suspense and keeps you at the edge of your seat on what is going to happen next. Stars my favorite actor Jean Reno in this semi horror/thriller film that is two thumbs up.

Jean Reno's cool as a retired tough-attitude detective and this film is great, white-knuckled thriller in the tradition of The Bourne Identity and Memento.

Empire of the Wolves Quotes