Employee of the Month2006 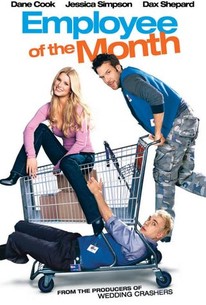 Employee of the Month Photos

When a pair of ultra-competitive clerks at a discount super store discovers that a beautiful, newly-transferred cashier has a reputation for only dating employees who have won the coveted Employee of the Month award, their desperate efforts to earn the title and get the girl lead to a hilarious war of one-upmanship in this winner-takes-all comedy starring Dane Cook, Jessica Simpson, and Dax Shepard. Zack Bradley (Cook) and Vince Downey (Shepard) have been working at the cavernous Super Club for ten years and counting, but while the ambitious Vince has advanced to the position of head cashier and landed 17 consecutive "E of M" awards, laid-back Zack is content to simply sit back and enjoy the company of his fellow box boys. Longtime rivals whose conflicting attitudes as to what constitutes success has led to more than a few conflicts, Vince and Zack find their bitter battle for Super Club supremacy coming to a head when attractive new employee Amy (Simpson) transfers over from another store. When word quickly spreads that Amy only has eyes for the cream of the crop, slacker Zack attempts to clean up his act and break free from his box boy roots while uptight Vince tries to impress by maintaining his top dog position and keep cool in the face of competition. ~ Jason Buchanan, Rovi

Robin Timpanaro
as Hot Mom in Line
View All

Critic Reviews for Employee of the Month

Reasonably entertaining, though probably better as a DVD rental.

The latest in a long line of lowbrow slacker comedies of the Clerks persuasion, Employee Of The Month is funnier and smarter than most of its contemporaries.

A likeable cast is underused in this cut-price guy comedy with only the occasional laugh.

Amy is little more than a pretty face, undermining the film's female appeal and leading one to wonder if Dukes of Hazzard eye candy Simpson is becoming a trifle typecast.

There's a great Office Space-style satire to be made about big-box stores screwing their working-poor employees, but Hollywood studios covet DVD rack space at those same stores.

There are people who think Cook is funny, but you won't find any evidence of that here.

Stand-up comic Dane Cook is left in a discount comedy.

Quite frankly, it makes perfect sense that Employee Of The Month is a terrible comedy - there's no one funny involved.

...there's ultimately very little here to appeal to even the most die-hard Cook fanatic.

So tossed-off and muddled it'll likely bore even the blue-collar male audience at which it's aimed.

Audience Reviews for Employee of the Month

Competition for employee of the month hots up at the supermarket when a new girl comes on the scene. Funny movie. Good cast.

Employee of the Month is a film that really has some sloppy writing and on-screen gags. This is the type of film that is fairly funny for the first thirty mins or so, but afterwards the film becomes tiresome, boring, and the gags fall apart. Add to that an awful cast of comedians and you have a very forgettable comedy that isn't worth your time. The film suffers from many elements that make an awful comedy. First, Dane Cook and Jessica Simpson. Boring. Awful writing, check. Directing, check. This film is a poorly crafted film that doesn't deliver anything memorable or very funny. The humor elements are tiresome and strained, and really aren't jokes you can laugh at over and over, like so many other classic comedies. Dane Cook is horrible here, he's like his stand up comedy act, and it gets boring and unfunny very quickly. There is no redeeming factor to this film, aside from the end credits. This film is a stale, unimpressive comedy that doesn't stand out due to its poor cast. The film relies on its poor cast to create its humor, and with that in mind, you can rest assure that the comedic deliver is awful. This film misses the mark, and despite having one or two decent gags, this film suffers from poor script writing and a poor cast. This could have been a better comedy. A very forgettable comedy that isn't worth watching. A missed opportunity to make a good film is squandered with poor comic material and basically poor everything. This is a film that suffers from everything that could make a bad film bad.

Dane Cook undoubtely carried this film and made it extremely funny. Jessica Simpson wasn't that bad either.

This is a pretty funny American comedy suburbia type laughs a go go, with Jessica Simpson and Dane Cook as the eye candy, there are quite a few laughs for you and your friends. I would recommend

Employee of the Month Quotes