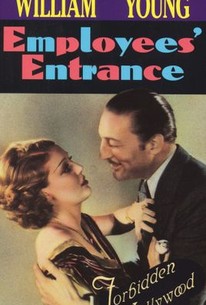 Warren William plays a high-powered ambitious executive who unflinchingly steamrolled his way to the top without regard for the havoc he left in his wake. As the manager of a Macy-like department store, he constantly browbeats his flunkies into submission, and ends-up driving at least one to suicide. Loretta Young plays the wife of one of William's minor employees (Wallace Ford), with whom the Big Boss has a brief affair during an office party. Eventually William gets his comeuppance, and Loretta is vindicated in the eyes of her hubby. A terrific example of pre-Motion Picture Production Code raciness, Employees' Entrance still causes audiences to gasp at its audaciousness when seen today--and also invokes loud laughter when William rebukes one of his errant vice presidents, asking him "What am I paying you so much for? Fifteen thousand a year!"

Frank McGlynn Sr.
as The Editor

Sam Godfrey
as The Man

Edward McWade
as An Employee

Muriel Gordon
as Girl
View All

Warren William gives quite an efficient portrait of a dictator of an important department store.

As an attack on ruthless capitalism, it goes a lot further than more recent efforts such as Wall Street, and it's amazing how much plot and character are gracefully shoehorned into 75 minutes.

...a slow-moving and mostly uneventful drama that nevertheless boasts an assortment of compelling attributes...

The Important thing about this picture Is that Warren William, who plays the lending role as a ruthless but extraordinarily efficient department store general manager. Is back In his old form.

You quickly get used to the on-the-nose dialogue... and the story moves quickly while still managing to develop our interest in the main characters.

Clever comedy/melodrama about a nasty power-hungry boss who gets his comeuppance.

Literally has everything that makes [the pre-Code era] so magical.

hardcore precode with warren william, terrific as a ruthless executive and womanizer, firing people left and right and even driving one employee to suicide. the film still packs a punch 80 years later

This movie is definitely pre-code, it's story is a realistic and truthful account of the troubles of a working girl and her boyfriend. This movie is worth a glance.

Pre-code shenanigans, really quite lurid in its way.