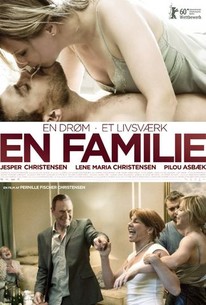 In this drama from Denmark, Richard Rheinwald (Jesper Christensen) is the patriarch of a family who've enjoyed considerable success in the baking business, running several up-market bake shops and catering to the Danish royal family. Richard is a man who believes in family above all else, and when he's diagnosed with an inoperable brain tumor, he decides its time to turn over the company to one of his children. Richard has two adult daughters, Ditte (Lene Maria Christensen) and Chrisser (Line Kruse), and he and his second wife Sanne (Anne Louise Hassing) decide Ditte is the right one for the position. But Ditte isn't so sure she wants a place in the family business; she's never worked in the bakery, has devoted herself to a career in the arts, and was just offered a job running a gallery in New York City that's just the sort of work she's always wanted. Ditte puts her plans on hold while she helps Sanne and Chrisser look after Richard, but she can't decide how to reconcile her own needs with those of her father; she also has to consider the feelings of her boyfriend Peter (Pilou Asbaek), who wants a more committed relationship. En Familie (aka A Family) was directed and co-written by Pernille Fischer Christensen; considering the strong role family relationships play in the film, it's interesting that neither the director, leading man Jesper Christensen or leading lady Lene Maria Christensen are related.

There are no critic reviews yet for En familie (A Family). Keep checking Rotten Tomatoes for updates!

There are no featured reviews for En familie (A Family) at this time.