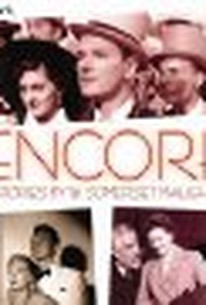 The producers of Quartet and Trio concluded their cycle with this omnibus film, which features three stories based, as in the previous film, on tales by W. Somerset Maugham. "The Ant and the Grasshopper" concerns Tom Ramsey (Nigel Patrick), a fiscally unstable young man who is constantly borrowing money from his brother George (Roland Culver). Eventually, George falls on hard times and is forced to sell the family estate, just as Tom marries a wealthy woman and is in a position to purchase it. In "Winter Cruise," Miss Reid (Kay Walsh) is an aging spinster taking a voyage aboard a cargo ship. She has little to do but engage the others on board in conversation, which the passengers find so annoying that they arrange a ship-board romance for her with Pierre (Jacques Francois), a porter, in the hopes that it will keep her quiet. And "Gigolo and Gigolette" features Glynis Johns as Stella Cotman, whose husband Syd (Terence Morgan) earns his living as a performer in a high-wire act. Stella is terribly worried that Syd's risky profession will lead to his death, so she takes their life's savings to a casino in hopes of winning enough that he can retire. However, her plan hardly goes as she hoped. ~ Mark Deming, Rovi

John Boxer
as [Gigolo And Gigolette]

Mary Merrall
as Flora Penezzi [Gigolo And Gigolette]
View All

Some of the Old Master's stylistic tricks are becoming a bit predictable to customers with keen memories, but the net result is still civilized adult entertainment.

The first two stories are a charming pair of lightly comic tales and the last darker in tone but no less of a pleasure owing to the enchanting presence of Glynis Johns, who looks utterly sensational and gives a terrific performance.