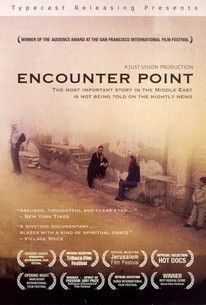 A clash of civilizations: suicide bombers and kidnappers on one side, spewing hateful, nihilistic rhetoric, and one of the world's most powerful armies on the other, reining down its massive force to subdue the local population and maintain its occupation. These are the archetypes that characterize coverage of the Israeli-Palestinian conflict. Caught in the crossfire are thousands of Palestinian and Israeli civilians who reject violence and who seek to build a secure, peaceful future for their children. Reverberations from the Israeli-Palestinian conflict are felt worldwide. It is perhaps the most divisive, polarizing and documented political issue of our time. "Encounter Point" moves beyond sensational, dogmatic and canned images to tell the story of an Israeli settler, a convicted Palestinian fighter, a bereaved Israeli mother and a wounded Palestinian ex-prisoner who sacrifice their safety, public standing, communities and homes in order to press for a grassroots movement for nonviolence and peace. "Encounter Point" explores what drives these and thousands of other like-minded civilians to overcome anger and grief to work for peace. Audiences are left with a sense that the gulf between Israelis and Palestinians is at once bridgeable and tremendously wide.

Face-to-face encounters are affecting, if brief.

It isn't often that you see a film about Israelis and Palestinians that can be called hopeful, but Ronit Avni's assured, thoughtful and clear-eyed documentary certainly qualifies.

It may not break any new aesthetic ground, but Encounter Point might just be the most optimistic film about this conflict you'll ever see.

By bringing those bloodied by the feud together, in the unlikeliest of encounters, deep in the heart of "enemy territory" -- no matter how entrenched their views and hardened their hearts -- seeds of understanding can be sown.

Perhaps it may have something to do with its nternational -- and predominantly female -- crew, but ENCOUNTER POINT actually posits a glimmer of hope for a nonviolent solution to a problem that has existed for generations.

In this fascinating documentary, directors Ronit Avni and Julia Bacha ask what kind of person counters malicious violence with activist conciliation, but offer neither pat answers nor false redemption.

There are no featured audience reviews yet. Click the link below to see what others say about Encounter Point!