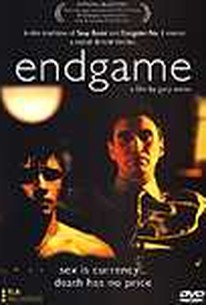 Young Tom (Daniel Newman) is a London prostitute pimped by the violently psychotic gangster Norris (Mark McGann), who regularly "offers" him to Dunston (John Benfield), a brutally corrupt detective with Scotland Yard. A tragic twist of fate frees Tom from Norris, but Dunston discovers Norris had been secretly videotaping his sessions with Tom in order to blackmail him later. Tom flees the city -- with the condemning videotape -- for a remote Welsh cottage with his American neighbors, Max (Corey Johnson) and Nikke (Toni Barry), with an enraged Dunston one step behind. ~ Buzz McClain, Rovi

There are no critic reviews yet for Endgame. Keep checking Rotten Tomatoes for updates!

There are no featured reviews for Endgame at this time.