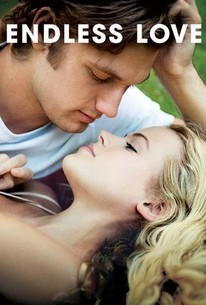 Critics Consensus: Blander than the original Endless Love and even less faithful to the source material, this remake is clichéd and unintentionally silly.

Critics Consensus: Blander than the original Endless Love and even less faithful to the source material, this remake is clichéd and unintentionally silly.

Critic Consensus: Blander than the original Endless Love and even less faithful to the source material, this remake is clichéd and unintentionally silly.

Sonia Rose
as Girl in Pool

None of the players exhibits much personality, but it's hard to fault them, given how thinly the characters have been imagined by screenwriters Shana Feste and Joshua Safran.

If there's any obsession or intensity in this movie, it belongs to Jade's father - a detail that throws the movie somewhat off kilter.

Endless Love never tries to look beneath that pretty surface. Or maybe it doesn't dare, knowing there's nothing to be found.

Far too serious to be a campy success and far too campy to ever take seriously.

The antiquated remake of "Endless Love" is enough to end relationships. A re-imagining of the 1981 Brooke Shields vehicle, which was pretty bad on its own accord, is a painfully endless stream of romance clichés with few redeeming qualities.

The romantic notion that there exists one very special person... one you'll want to be with for the rest of your life, is at the heart and soul of Scott Spencer's novel Endless Love, which now arrives in its second, superior incarnation on the big screen.

As it is, the film is just crappy, sappy, PG-13 Valentine's Day drivel.

In the newest version, blonde goddess Gabriella Wilde gets gooey with Viking-looking dude Alex Pettyfer while the adults cluck their withered tongues.

Like fast food, Endless Love feels engineered to satisfy in the moment without providing any sort of nutritional value.

Bearing no resemblance at all to the original story, this endlessly awful teenage melodrama basically tries to create conflict by turning the girl's father into a monster but only manages to be nonsensical - really, it doesn't even have any idea of what a recommendation letter is.

Some movies are so laughably bad that they are entertaining. Here is one of them. First, based on the trailer I thought this was going to be some kind of drama/thriller mix, like the movie "Fear". But, I was way off on that. This is a straight up teenage love story. Very generic, very predictable, and pretty stupid. The acting is bad, I'm sorry but Alex Pettyfer has zero charisma and is as wooden as Keanu Reeves. What makes this a fun movie to watch is making fun of it while you watch it. Emily and I made quite a few jokes during it, and rolled our eyes a lot. I'm sure some teenage girls will love it and think it's so romantic. But adults will just go "oh lord this is dumb".

First of all, I haven't seen the original movie starring Brooke Shields. Maybe I would be giving this a much lower rating if I had. As it stands, this movie was new to me, although the plot certainly wasn't. Poor boy falls for rich girl, and Daddy's not happy about it. Yep, seen it before, wasn't expecting anything outstanding. Actually, I didn't expect to even like this movie, had no plans of ever actually even watching it, but I did, and surprisingly, I really enjoyed it. Something about the two leads worked very well together and I did find them believable and sweet together. I wanted things to work out for them. I would go as far as to say this movie is lovely. Must have caught me in a weak moment. I do have to admit, some of the dialog, particularly with the mother, was hammy, though I could sympathise with her, and I understood what she meant. The dad ran into caricature a few times, particularly in the dramatic scene near the end with the son's belongings, and the dancing at the party, wtf? Flaws aside, I really liked this, though. I'll definitely be getting this one for my collection. Realistic? Probably not. Romantic? Totally.