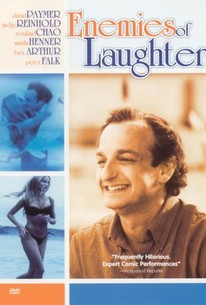 How does a man convince the woman he loves that attempting to make him the toast of Broadway could be a really bad idea? Paul Halpern (David Paymer) is a cynical, middle-aged comedy writer who primarily works in television. Paul once had dreams of becoming a successful playwright, but after a passionate, short-lived relationship with a beautiful woman, he wrote a stage drama that became a notorious flop when it was presented for the first (and only) time by a Los Angeles theater company. Paul has come to believe that his play is cursed, and he has spent years trying to distance himself from the ill-fated project. Paul is more single than he'd like to be these days, and he's encouraged when he's approached by Carla (Rosalind Chao), an attractive, intelligent woman who seems quite fond of him. However, while Carla is attracted to Paul personally, she also has a professional interest in him. Carla is a director who wants to stage Paul's play in New York, and while he'd like to make her happy, he thinks it would be inviting disaster to put his drama back on the boards. Enemies of Laugher also features Judge Reinhold as a filmmaker directing a documentary about Paul, Peter Falk and Bea Arthur as Paul's parents, and cameos from Marilu Henner and Kathy Griffin.

Doyle McCurley
as The Chef
View All

Critic Reviews for Enemies of Laughter

An all too apt title for a would-be comedy in which everyone in it and everything about it seems willfully designed to be unfunny.

Pretty ballsy of the filmmakers to go with the title "Enemies of Laughter," seeing that it's a comedy.

A small, delightful indie flick with a singular voice and spry wit. Rarely is a title so willfully far from accurate.

This slow, stilted comedy just sits there and whines... kind of like its lead.

Paymer has developed a sort of practiced gravitational pull, and his easy confidence, enhanced by eyes that can only be described as soulful, elevates his character from a flat Woody Allen wannabe to a fully realized human being.

There are no featured reviews for Enemies of Laughter at this time.