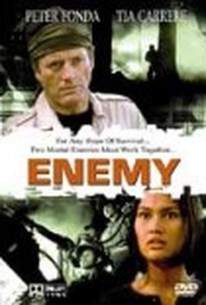 Starring and co-written by Peter Fonda, Enemy (aka Fatal Mission) is a Vietnam-era action drama. Fonda plays an American Special Forces agent caught behind enemy lines. He takes a Chinese spy (Tia Carrere) captive with him through the jungle, but realizes that she knows her way through the wilderness and may be his only hope of finding a way out. The two are forced to put aside their hatred of each other in order to make it out of the jungle alive.

There are no critic reviews yet for Enemy. Keep checking Rotten Tomatoes for updates!

There are no featured reviews for Enemy at this time.