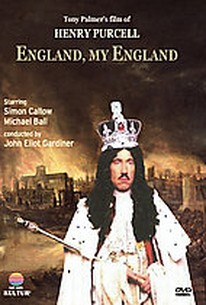 This British biopic attempts to chronicle the life of 17th-century tunesmith Henry Purcell. The filmmakers have had to do much speculating about Britain's first great composer, as little is known about his life back then. It is known that Purcell had been a chorister as a child and then became the court composer for three kings: Charles, James and William. Before his death at age 37, Purcell penned over 1,000 songs and sired a few children, most of whom died at birth. While little is actually known of Purcell, the film successfully recreates the tumultuous era in which he lived. Also running parallel to Purcell's story is a set in the 1960s when English society and values seemed to be rapidly eroding, just as they were in the composer's time. The story concerns a playwright's attempts to research the life of Purcell for his next play. In the last part of the film, several lavish musical numbers from Purcell's vast repertoire are presented. ~ Sandra Brennan, Rovi

John Hibbs
as Blacksmith
View All

Critic Reviews for England, My England

There are no critic reviews yet for England, My England. Keep checking Rotten Tomatoes for updates!

There are no featured reviews for England, My England at this time.