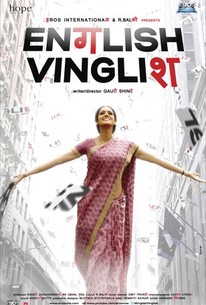 Money, Fame and the Knowledge of English. In India, these 3 factors play a huge role in how society judges an individual. English Vinglish is the story of a woman who does not know English and is made to feel insecure by her family and society at large. The film is a light-hearted yet touching and transformational journey of Shashi. Circumstances make her determined to overcome this insecurity, master the language, teach the world a lesson on the way to becoming a self assured and confident woman. The film is shot mostly in New York and captures the inherent struggle of many people all over the world with the English Language. Hilarious, touching, sensitive, this film marks the come back of India's biggest female star...Sridevi. -- (C) Official Site

Shivansh Kotia
as Sagar
View All

English Vinglish, Gauri Shinde's first feature is a likeable film, which gives us a silky- smooth first half, a slowed-down second, broad-brushstroke-y characters, and an actress who makes it all work.

A capable supporting cast and a fun cameo from a male megastar add to the appeal of this slight, enjoyable but ultimately predictable journey.

The image of the newly confident Shashi striding down a Manhattan street, a takeout coffee in hand and a trench coat belted over her sari, will make you smile days after you leave the theater.

A winsome if utterly conventional ugly-duckling story about a sympathetic character's much deserved progress toward a richer self.

An undemanding picture that goes down as well as the heroine's tasty ladoos.

There are no featured audience reviews yet. Click the link below to see what others say about English Vinglish!